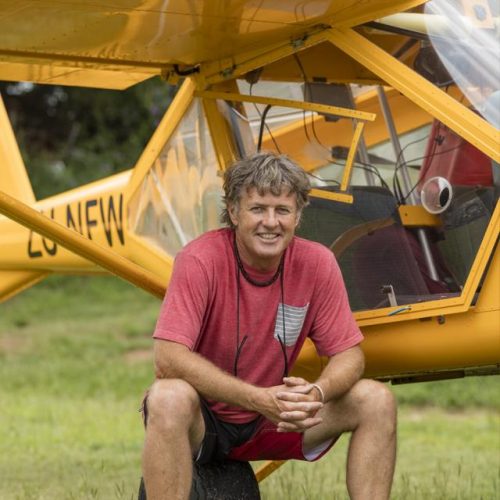 The Flying Club Founding member, David Daniel, dreamt about flying as a little kid.  By the time he was in high school, he had flown line controlled models, built balsawood gliders, designed and built his own boomerang rotor blade and hung every conceivable model aircraft from his bedroom ceiling..

Pre-teen years were spent cycling out to the local airfield on week-ends, hitching rides in the club C-172.  During the latter part of his  high school career, he started flying sailplanes, or gliders.   Then followed a PPL from Cessna Flight Centre at Rand Airport in Johannesburg in 1981.   Many years later,   passing a Hang Gliding School branded vehicle in the streets of Durban, he made a quick U-turn and  caught up to the vehicle.  That led to a Hang Gliding licence in the early 90’s,  and a life-long friendship with his Hang Gliding mentor.  This chance encounter made it possible to do to a 1 month Hang Gliding Tour of the Alps in Southern France.  Finally discovering Microlight Aircraft in the late 90’s, his life-long dream of making a living out of flying was realized.  Closing his Civil Construction Business, a life changing career decision was taken.

As a little pup….. Zulu’s appetite for aircraft and flying came from kicking plane tyres at airfields and growing up in the back seats of mom and dads bush planes! In the SA military, he spent a lot of time in SAAF helicopters and the passion ignited!

After returning home as a young adult, he honed his skills hang gliding on the KZN south coast and Drakensberg slops. Shortly thereafter, microlight trikes hit the scene and he quickly worked his way up from pilot to A grade instructor, making a living profession for many years. Not stopping there his passion expanded on to Light Sport fixed-wing aircraft and rotary-wing Gyrocopters!

Combining all 3 of his passions…adventure, flying and wildlife protection…. Zulu advanced his flying skills as a conservation bush pilot in Northern Zululand, flying anti-poaching runs, Rhino/Elephant protection/survey and whale shark/turtle tracking. Along with his other interest, the marine industry, he was selected to fly as aircrew on air/sea rescue helicopters.

In Australia, apart from teaching flying, Zulu delivered new aircraft for an agent to cattle stations in the Outback giving the client advanced flying ratings on the type and returning with the old aircraft. Still in the Australian Outback, Zulu flew Sailplanes/gliders, just for fun! As good karma would have it…back in SA, he ended up flying the annual Sardine Run for 11 years along the KZN and Transkei coast for Nat Geo Wild, BBC World, Blue Planet, IMax and many other independent scientific groups and filmmakers making wildlife documentaries!

Your opinions are important to us. Whether it is a simple question or a valuable suggestion, we are here 24/7. You can call us by phone, WhatsApp or email us directly.